"Once the Wizarding Challenge begins, tap on each Foe to learn more about them and to engage them in combat."

Foes are adversaries that you and other players face during Fortress Challenges. Almost all Foes can also be found as Oddities. Not all, but most of them.

There are three types of Foes. All Foes are classified into one of these three categories...

Each Profession is strong (has a Proficiency) against one type of Foe. This also means that they will be neutral against another type of Foe, and weak (Deficient) against the third.

Notice how the colour of that signifies each Profession is Proficient against the Foe that has an Icon of the same colours. That's not a coincidence. It's there to help you identify which foes you'll be strongest against.

in addition to their statistics, Higher Level Foes will begin to have access to special Powers, making them harder to defeat.

Foes have the following Statistics (Stats):

How much damage they can sustain.

Incraese your Power and your Critical Power Stats to ware down a Foe's Stamina faster.

How much damage they can dish out with each attack.

This is countered by increasing your Defence Stat.

The chance that they can completely evade your attack.

This is countered by increasing your Accuracy Stat.

How much they will reduce each attack by.

This is countered by increasing your Defence Breach Stat.

Acromantulas and Death Eaters do not have a Defence Stat.

Some Foes (particularly those in higher level Chambers) have abilities that augment their basic statistics. 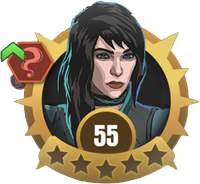 Elite Foes are signified by the word, "Elite" in their name and their gold border in the Chamber. Elite Foes have around double the strength (Stats) as their standard equivalent.

Retrieved from "https://harrypotterwizardsunite.fandom.com/wiki/Foes?oldid=4816"
Community content is available under CC-BY-SA unless otherwise noted.